Zenzi had her second herding lesson at SoCal Herding yesterday.  She was again totally over aroused by the sight of the sheep running around with other dogs working.  She was a barking maniac, but did manage to soothe herself effectively enough that we could hang out ringside if she sat behind my legs.

Her first session was pretty intense to start.  She was very, um, eager to work.  Kelly says that she's still working out what her job is, exactly.  She definitely has figured out that if she runs at, barks at, and bites them, they run away.  That's pretty nifty.  Now she has to learn about the safety zone for the sheep, and not be so quick to bite.

While we waited for our second round, I got some photos.  I was very proud of Rubble's session with Kelly, so you'll notice a few shots of her petting him.  That was the first time, in nearly 2 months, he's allowed anyone there to touch him.  Kelly said, "I have goosebumps.  This is amazing."  They're such good people. 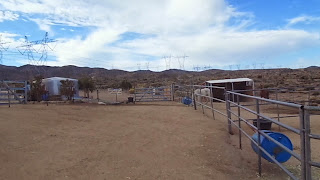 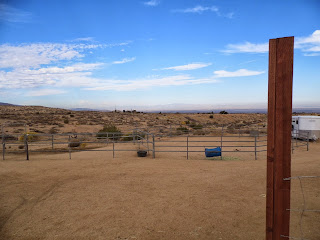 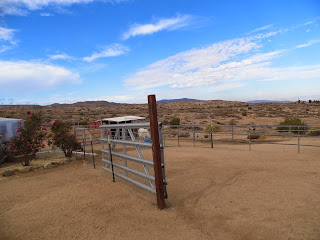 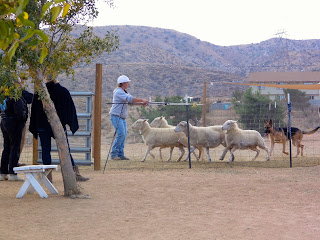 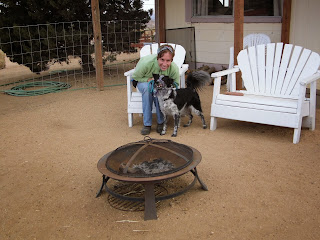 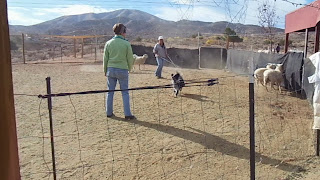 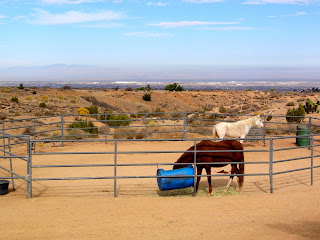 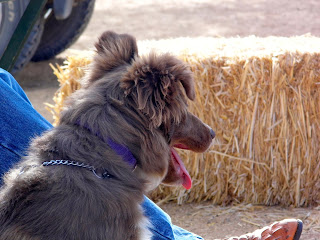 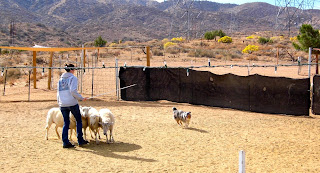 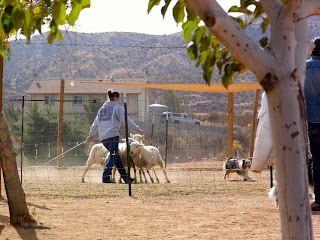 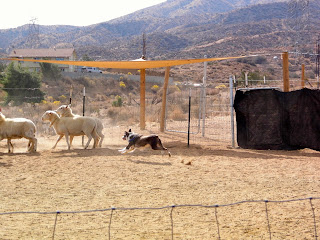 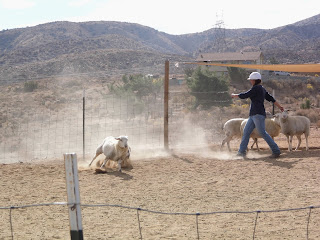 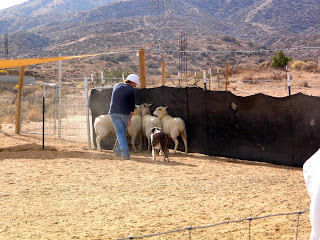 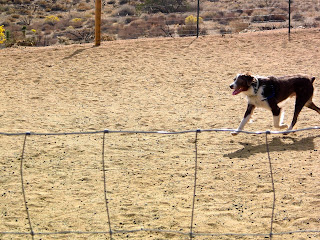 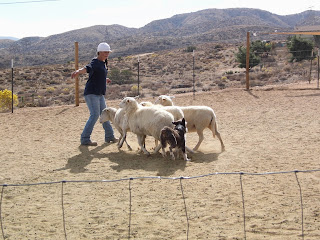 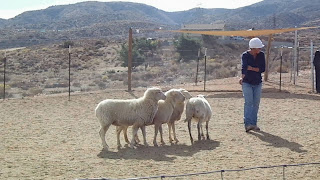 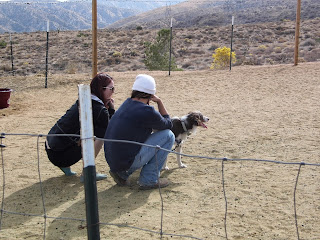 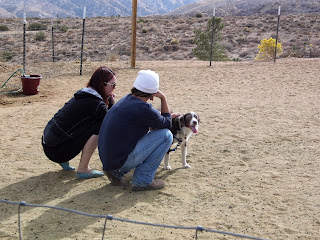 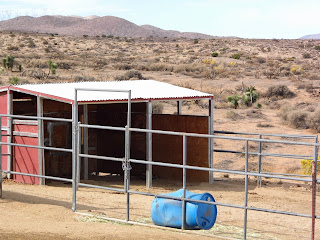 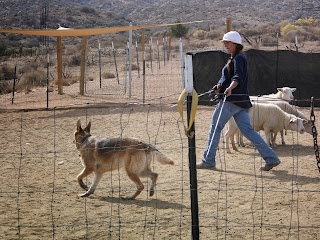 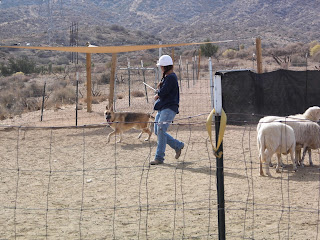 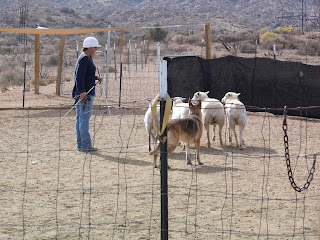 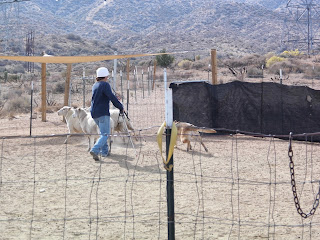 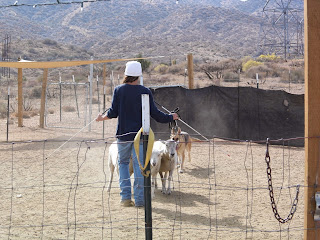 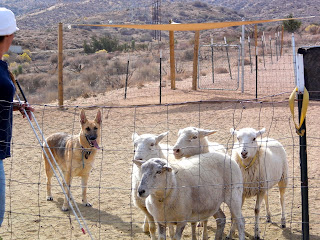 So then it was time for our second run, and you can see Zenzi's frantic beginning mature into a much sweeter, more controlled finish.  Kelly was impressed!  She says Zenzi is progressing very well.  I don't know much about any of this, but I'm glad to hear.  Kelly also says that Zenzi's confidence is growing, and now that she's seen that Zenzi will bite and grip, Kelly plans to increase her wand pressure to discourage that.  I love how they're so careful about any sort of correction they plan to do.  I'm 100% behind it, though.  When you're dealing with instinct and using real-life rewards, there's no way around corrections.  The corrections are totally fair and correspond to the level of the behavior.  Zenzi did get her first tap on the nose with the wand.  She's decided that she'd just as soon bite the wands as the sheep, so... Anyway, here's our second run!

Once again, we had a glorious time.  Zenzi allowed several people to approach and pet her, without running away or barking at them.  The socialization aspect is, again, just as valuable as the actual herding!  We're making friends ourselves, Rick and I, and discovered that they board dogs over there. Any time our dogs need boarding, that's the plan.  Wags & Wiggles is wonderful, don't get me wrong, but not a perfect fit for a dog like Zenzi.  She does not relish the company of other dogs the way she does "her people" and working sheep!  Sarah is boarding Rubble there over Thanksgiving.

Next week, I'm flying home to MI to visit family, so there will be no herding next week. :( After that, though, it's back on!

I'm seriously going to have to do this every week.  This is SO MUCH FUN!  I want to remember it all!  So today, Zenzi and I had a challenge of a course with 12 obstacles.  TWELVE.  Last time, we had 5.

We didn't finish the course today.  But that's okay.  We got over halfway!

So we made it through 1-8 by the end.  We could have finished it, but we didn't want to push it.  Zenzi isn't totally committing to the obstacles yet, and that particular go was a HUGE improvement over our initial runs, so we stopped there.  Yes, we did all those front crosses rather neatly. :)

Meanwhile, between runs, I'm working with Zenzi on being quiet in her crate while we wait.  She won't just nom on a bully stick in her crate anymore.  She will chew a bully stick waiting on her mat, but she won't stay on her mat through exciting agility goings on, even with a barrier.  It takes almost constant reinforcement now.  I can wait two seconds, I have to reward for every noise, and I can now sit on top of the crate instead of in front of it.

After the coursework, we started PVC box targeting in preparation for contact obstacles (A-frame).  Zenzi already knows how to target a box with her four paws, so we progressed to naming it "Hit It" today.  The box was about 10 feet away, and I would click when she put all four paws in, then toss a treat out and away to the side to restart.

I go on and on about these to my dog-loving/owning friends and colleagues.  I just haven't really done them all yet.  So begins our first project:  Conquering all Four Training Levels by Sue Ailsby.

You can view what we'll be working from here.

I will be training both Dolce and Zenzi, but Zenzi is priority.  Dolce is much more "livable" right now, so Ms. Zenzi gets the most work right now.

After we finish the levels, we'll do Rally Obedience.  Concurrently, of course, we will continue our Agility and Herding lessons.  I have ordered the Train 'Em Tasks cards for AKC Novice, Advanced and Excellent levels, and they arrived yesterday.

I also intend to implement a much more vigorous workout regimen for Zenzi.  We will play ball or frisbee at least once daily until she's fully tuckered out.  This will take the edge off her hyperactivity anxiety.  Kind of hard to have self-control if you're jumping out of your own skin with constant cabin fever.

Dolce and Zenzi are working on their territorial barking with the front patio door open.  Using a gentle leader has proved very useful to discourage barking in as positive a way as possible, so I implement that if she doesn't respond immediately to my Enough cue.  I ordered a purple deluxe GL to be as soft as possible.  I bet she looks adorable in it.  I may go back to using it on walks if it doesn't irritate her fur as much as the old nylon one did.  It got stiff when she drooled in it or drank with it on and then it dried out.

I intend to video each level once we've completed the most challenging elements per topic.  Stay tuned!


For now, I leave you with this angelic photo:

This past Sunday, Zenzi, Rick and I headed out to Palmdale for a herding lesson at So Cal Herding with friends, Kristina and Sarah.  Kristina and Sarah are already regulars, having gone at least a handful of times before.  It's almost 2 hours from us, but we wanted to give it a try.  Zenzi's behavior recently was telling me that she needed to do what she was born to do more often.  Here's what I've been noticing:


So Rick and I got in the car and made our drive out to this new place.  We had to stop for breakfast at McDonald's, and then again later for gas.  But we made it on time for our 9:30 group arrival time.

It's a place in the desert, but it's quite homey and beautifully set in the mountains.  It's a modest little house with a big porch, filled with other dogs and their handlers.  The owner's dogs were wandering around off-leash, perfectly happy with all the "intruders" being on their property.  I kept thinking to myself, "Gosh, I'd love for Zenzi to have this someday..."

We found Kristina and Sarah in no time, and hung out in the waiting area with them for our turn.  Where at Robin's place, it's just you and Robin, you do your lesson, then you leave, it's a much more communal atmosphere at Ted's.  You wait with everyone else for your first run, then your dog gets a breather and you go again after everyone else has had their first go.  I absolutely am so grateful for the social aspect.  Being a complete and total newb to herding, I enjoyed meeting all the experienced students there.  Many were big, burly men, so it was a great opportunity for Zenzi to start overcoming her fears.  I could see her come out of her shell more and more.  Especially with Ted.  She let him pet her within minutes.  I was amazed.  She even approached him!

When our first run was finished, I felt like it was exactly what Zenzi needed to vent all her pent up frustration.  She's clearly got more of the Australian Cattle Dog herding style with how vocal and nippy she is, than a border collie herding style with lots of eye and stalking.  So we went back to the waiting area.

I swear, I have never seen the girl looking so happy in such an unfamiliar, full of strange people and dogs, place.  It was becoming clear to me that Zenzi was choosing Ted & Kelly, and we should go back more regularly.  Weekly even, depending on pricing.

Our second run was after Kristina and her sheltie, Merlin.  Shelties have all but had the herding bred out of them for the most part, but luckily for Kristina, Merlin is one of the few exceptions. :)
We waited by the shed next to the round pen.  Zenzi got really amped pretty quickly when she saw the sheep being moved around, so we would get a glimpse then duck behind, depending on her behavior.

I definitely think our second round was significantly better.  It's clear that Zenzi leans on me for support, so we have to stay together, she won't just work for Kelly.  While I really appreciate the loyalty, I do hope Zenzi can work with Kelly eventually.  Having a totally novice dog and handler is hard enough in agility!

When we finished, we hung out and waited to hear from Ted about policies, payment, and registration.  Prices are very reasonable, and policy is very agreeable.  After looking at this face:
Rick and I decided this needs to be a weekly commitment for Zenzi's sanity, happiness, and well-being.  The socialization, the influence from the other dogs, getting to play with sheep... It's who she is, and who she needs to be.  She can be around horses, too!  They have two beautiful horses on the property for Zenzi to get accustomed to for down the road, when Rick and I have a horse.

So we headed back home, and will be back next week.