I got Kibeth a "puppy dog" stuffed animal (pretty decent sized) at Walgreens the other day.  It was only $7, as compared to the $20 it would cost at PetCo for a comparably sized toy.  Today, for the first time, I called it her puppy as she was holding it in her mouth.  I said, "Do you have your puppy?"

Then tonight, Kibeth looks at me from behind the couch, where I'm sitting.  She looks at me expectantly, as though the puppy will materialize for me to throw.  Being sick, I didn't want to get up and go to my bedroom (where I know it is) so I lamely told her to, "Go get your puppy!"

By golly, she turned, trotted off to the bedroom, and a few seconds later, returned with puppy in mouth!!!!!

Jackpot of treats (that just so happened to be handy) for that. I <3 my dogs.  Greyhounds are geniuses!  They're just quiet and sneaky about it.
at 6:35 PM No comments:

I just couldn't resist capturing a few funny laying down poses my hounds come up with.  You'd think I don't provide them enough dog beds (there are 6, including mine). 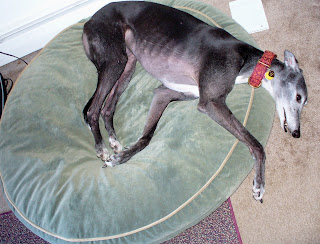 Kibeth, I hate to break it to you... You MISSED! 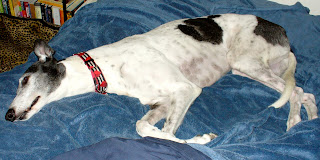 JoJo, dear, that's MY bed.  You can't take your half out of the bottom middle. 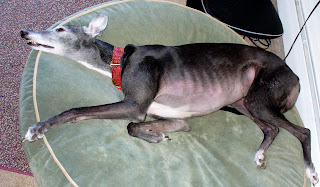 Kibeth, is that actually... comfortable?  Put your ear down.  You look like a doberman. 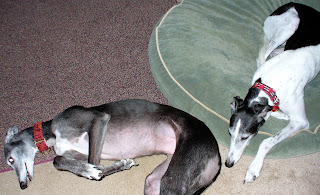 Now, someday kids, you will learn to share the big green bed.
I want them to put some weight on.  We're working on it.  I see too many ribs when they're laying down.
at 6:45 AM No comments: 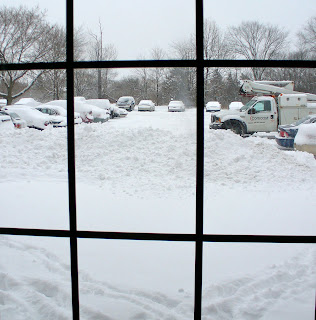 This is Michigan snow, my dear.  That Georgia stuff is... lame. =P
Yep.  We walk at least 4x a day in that stuff.  It comes up to mid-calf, but that pile from the plow is about 3.5ft tall.  My girls are both from down south, so they don't particularly like all this cold, snowy, wet weather.  At least they have their leopard coats!
at 6:37 AM 1 comment:

To the greyhound who won best of the hound group on the Eukanuba dog show tonight!
at 8:15 PM No comments:

Well, I had all these wonderful plans prepared.  Then life hit.

Speaking as a person with PTSD (post-traumatic stress disorder), I can honestly say that it has the ability to interfere with my life to an extent that it takes out all my energy to anything but school, work, and practice.  I'm hoping I'll be able to recover some of myself now, and get going on training.  Stay tuned!
at 4:59 PM 3 comments: