I'm slightly sad to say that Kibeth is really slowing down lately.  I know she turns 9 in October, but wow.  She prefers more leisurely walks, and doesn't want to jog anymore.  She hardly ever has zoomies, except for a few brief strides at the dog park last weekend -- those were the first in quite a while.

I am growing more and more aware of the risks of old age with her.  It's weighing heavily on my mind.  She's my first dog.  This December 10th will be 6 beautiful years together.  I remember when she first came home, she slept all the time.  She slept like she'd never slept a good night's sleep in her entire life.  She was 3 when I brought her home.  After that, we worked on her insecurities.  My touching her ears did not mean death, nor did touching her paws.  Though she now trusts me with "Shake" I have never clipped her toenails.  However, she is more permissive with the vet techs or groomers.  She never used to seek attention, but she always reveled in a good neck scritch.  We do "Car Wash" where she will walk between my legs, slowly, while I scratch/rub/massage all along her sides and back until I get to her hips... where evidently, the car wash breaks down because I always have to push her the rest of the way through when I can't give her anymore because my hands hurt and my arms are sore!  Haha.  She's a tough love kind of Mama, but she's wise.  Her face gets grayer and grayer, and all I can think is how little time it seems we've been together.

I remember it took her 2 weeks to learn how to sit, and to sit on command.  She is one of the finnickiest eaters ever.  We must have tried every kibble on the market before going raw 2 years ago and loving it!  She loathed a crate, but she's always had her giant leopard bed.  That bed will be hers for the rest of her life, and I swear it will go with her to the grave.  She chose me by laying in that bed, and it seems only fitting that it be hers forever and in heaven.

Gosh, I'm so scared of that day.  I'm so worried it's drawing ever nearer.  I'm not good at making tough decisions, so I pray that she will let me know when it is time, and there are no alternatives -- it'll be the best thing or just her time.  She's my rock... always there, always a firm presence, and definitely capable of hurting you if you handle her wrong.  I love her so much, I just hope she's enjoying life as my grey.

Kibeth, I love you.  You've earned your leisurely retirement, and you will continue to be spoiled with love, pets, the best food, and your favorite treats (bread crusts ftw!).  You've been with me 2x as long as you were at the track now.  I hope those evil days in a crate so small your butt went bald and your tail got a calous are long forgotten.  We've been on quite an adventure together, and I look forward to our new lifestyle together. 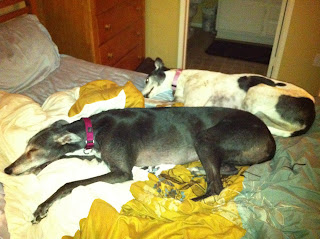 This is a candid video my fiancé grabbed of a recall Dolce did at the doggie park.


This is another candid video my fiancé got of Dolce alongside him on a bike ride.  He was going too slowly for Dolce. Gotta get that man in shape! =P

I've finally decided to write a book and stumbled upon a subject.  I'm going to write about my childhood as an only child, and add in one of the fantasies I used to play out to keep myself entertained:  I'm lonely, I have no brothers or sisters, no friends, and I discover my dog can talk.  She becomes my best friend, and we do all sorts of things together.  You get the idea.

My question at this stage is:  which dog do I use?  Sami, who I grew up with?  Kibeth, who is my first greyhound and dog whom I am solely responsible for?  JoJo, my heartdog?  Or Dolce, the dog with the most stories between them all, the youngest, and I've only had him for 3 months?  Or should I use a dog I've never met, one from my imagination?

They hounds and I are enjoying their seemingly mutually decided retirement.  What they know, they know, and they enjoy practicing it.  They don't feel a particular need to learn new things; and now with Dolce, I don't feel a need to push it on them.  This summer, I would like for them to get their CGC.  After that, I'm content.

Dolce, on the other hand, is my little genius.  However, like most smart kids with attitude problems, he gets into trouble.  A lot.  We're dealing with herding instincts at dog parks, dog reactivity on-leash, housebreaking, polite people greeting (not growling with uncertainty or jumping for joy), and structured play can still be fun like doing whatever the heck you want at the time.

I'm tempted to create a separate blog for him.  I haven't written as much as I'd like just because I don't know how to structure it, haha.

I think he's younger than the shelter thought.  His smooth (read as short), black border collie fur is really coming in, and his fluffy little fawn undercoat is diminishing rapidly.  He's going through a serious teething/chewing phase.  I'd guess he was only just barely a year when I got him 3 months ago, not 16 months.

We're using BAT, Patricia McConnell's Feisty Fido ideas, and Leslie McDevitt's Control Unleashed principles to rid him of his on-leash dog reactivity issues.  A couple trips to the best doggie daycare in town cured Dolce of his issues at the dog park, for which I am very grateful.  However, he still tries to herd the other dogs there occasionally by nipping them on the butt, or grabbing their tails.  His fast little whippet legs make it very fun to catch the other dogs in a game of chase.  However, one day, he's going to get yelled at by a dog who is not understanding, nor appreciative.  Sure, a few dogs and turned around after a while and yelled at him and he stops... for a while.  I've yelled at him and stopped him, too.  Still he continues.  Oye.

I have so many aspirations for him.  He's a very talented pup.  I want him to do obedience, rally obedience, flyball, agility, disc dog, freestyle, and service dog work.  We took an obedience class, and had a blast.  He passed with flying colors, though leave it was tricky.  I can't wait to start the 2nd class.  He loves training.  He'd train all day if I could.  He also REALLY loves to bike with me.  When he starts to get antsy, we just go for a bike ride and let it all out.  I attach the leash to the seat bar, and he runs alongside beautifully.  If we encounter another dog and he pulls, he's light enough that his episode is cut short by our speed.  He usually tries to run full tilt after an outburst, as though he's trying to escape his own anger.  The outbursts are becoming less and less intense, and are actually decreasing in number altogether.  Dogs can be closer and he won't react than before.  I'm very encouraged that he will one day be the socialite that JoJo is with dogs, and that Kibeth is with people.

Getting to know him, I have decided border collies are definitely the breed for me.  Whether I could handle a purebred is up for grabs, but I am in love with the lifestyle having Dolce forces me to live.  I can't wait to get passed our issues, so we can get to the real fun and train and compete in all these doggie sports. :)
at 12:55 PM No comments: